The members of the joint mission of Maat for Peace, Development and Human Rights started arriving in Geneva, consisting of four organizations: Maat, Partners for Transparency, which are in consultative status with the United Nations Economic and Social Council, the International Alliance for Peace and Development in Geneva and the International Consultations Group, a center of excellence on human rights and international mechanisms.

Foremost among the functions of the joint mission is to train participants on how to cooperate with United Nations mechanisms for the protection of human rights in a coexistent manner.

During its participation in the work of the UN Human Rights Council at its 41st session, which is beginning on Monday, 24 June 2019, the mission will discuss the crisis of the return of foreign terrorist fighters in some European, Arab and African States and the possibility of rehabilitation. As well as opening the file of corruption in the Middle East and the impact of corruption on women’s rights, by organizing two seminars on the sidelines of the session.

Mr. Ayman Okeil, the Head of the mission and President of Maat for Peace, Development and Human Rights, said that the mission aims to promote peace, acceptance of others and coexistence with different cultures, through the participation of members from different countries and cultures, united for peace, respect for human rights in all parts of the world and renounce extremism, violence and terrorism.

Mennatall Abdelraouf, the Coordinator of the mission and Head of the International Human Rights Mechanisms Unit at Maat, stated that all participants met under the slogan “Unite for Peace”. The gathering is the beginning of a major event is being conducted by the mission during its participation in the work of the session in Geneva and will be announced at the beginning of the session.

2019-06-22
maat
Share
Previous Maat in its report on the sexual abuse of blue berets: Zero tolerance regarding accountability
Next Launch of the Training Course on International Mechanisms 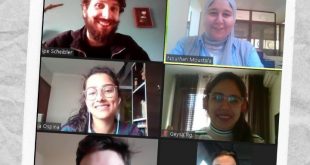