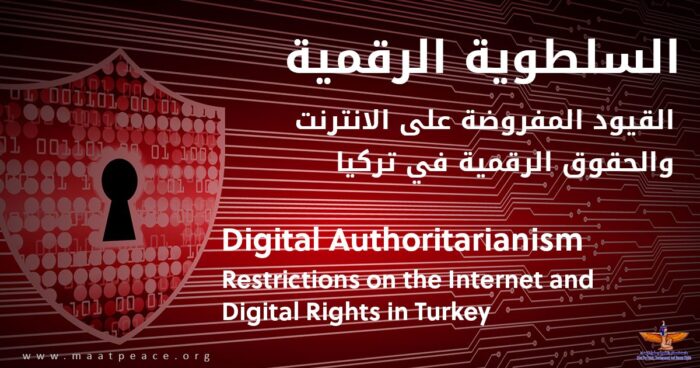 Mukhtar: Turkey has to immediately stop all forms of online manipulation

Maat for Peace, Development and Human Rights has issued a new report entitled “Digital Authoritarianism… Restrictions on the Internet and Digital Rights in Turkey”, which highlighted the severe restrictions imposed by Turkey on freedom of opinion and all means of expression, such as shutting down opposing newspapers and media outlets, with the aim of muzzling opposition and silencing them. The report outlined the Turkish Government’s adoption of a multi-track strategy aiming at completely controlling the internet and restricting access thereto by blocking websites or completely shutting down the internet. From November 2019 to October 2020, the Turkish government blocked 26 news websites. Besides, it carried out mass surveillance on online behavior and launched waves of arrests against citizens based on their views on social media. All this is compounded by the cyberattacks and organized abusive campaigns conducted under the auspices of the Turkish government with the aim of distorting the image of political opposition and accusing them of treason and corruption in order to undermine citizens' confidence in their opinions. The Turkish government legitimizes all these practices through a new set of strict laws, the best example of which is Turkey’s Social Media Law of July 2020.

In this context, Ayman Okil, president of Maat, said that the relentless censorship imposed on social media websites created an atmosphere of fear among internet users, preventing them from expressing their opinions on specific issues, which creates a culture of self-censorship and fear that exacerbates the inherent right to hold and express opinions without interference. Okeil also explained that the Turkish government’s imposition of an effective blackout on users’ access to unwanted information on the Internet, which is often related to the discussions on human rights violations committed by the Turkish security services, constitutes a violation of article 19 of the International Covenant on Civil and Political Rights, which gives citizens the right to freedom of opinion, expression and access to information through any media outlet regardless of boarders. Okeil called on the Human Rights Council in Geneva to pressure the Turkish government to put an end to its digital violations, as well as to release activists detained for exercising their legitimate tight to express their opinions on the Internet.

For his part, Mohamed Mukhtar, a researcher at Maat, said that the Turkish authorities try to manipulate the online content by recruiting groups of people known as “Erdogan’s White Army,” for distorting the image of political opposition and accusing them of treasons or lack of morals, thus undermining their ability to influence the public online. Mukhtar also demanded the Turkish government to adopt a policy based on immediate elimination of all forms of online manipulation.