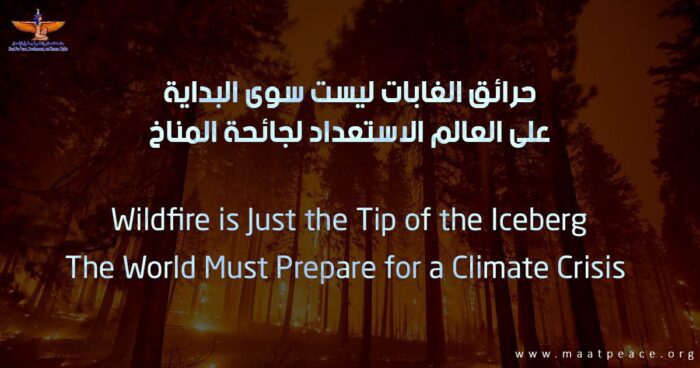 Wildfire is Just the Tip of the Iceberg... The World Must Prepare for a Climate Crisis

Wildfire is Just the Tip of the Iceberg... The World Must Prepare for a Climate Crisis
Maat releases a new study entitled: "Climate change threatens the displacement of 150 million people and the disappearance of cities under the sea"

Maat for Peace, Development and Human Rights has released a new study entitled "Wildfire is Just the Tip of the Iceberg... The World Must Prepare for a Climate Crisis", which addresses the devastating far-reaching impact of climate change on human life and the entire ecosystems, while highlighting the alarming increase of forest fires as well as the devastating floods that threaten to destroy entire cities.
Climate change has caused a global, far-reaching emergency that transcends national borders, and requires coordinated solutions at all levels and international cooperation to help countries move towards a low-carbon economy (LCE), ensuring work to achieve sustainable development goals, and strengthening the resilience of countries, especially the poor and developing ones, in the face of these changes. While the major and developed countries have caused climate change, through the industrial revolution and the heavy dependance on unclean energy, it is the developing and poor countries that pay the price and suffer the most from the catastrophic effects of extreme disasters exacerbated by climate change, despite their dependence on simple, harmless economic activities such as agriculture and fishing.
The floods and fires, which have recently occurred in several countries, raise the alarm for all countries about the need to unite and work together to confront the repercussions of climate change, which are increasing at an unprecedented and rapid pace, calling for immediate action and urging all countries to share responsibility and stand together in face of these risks that may destroy some countries without warning.
Confronting these risks calls for limiting the practices that increase emissions and raise temperatures directly so that the current climatic conditions don’t get worse, in addition to joining hands to confront the current effects of climate change, and providing assistance to countries affected by climate change.
Maat, therefore, recommends the non-signatory governments to the Paris Agreement to immediately sign the Agreement and work to implement the terms thereof in order to achieve its goal and reduce carbon rates. Besides, developed countries should feel responsible and help developing countries, financially and technologically, so that the latter can survive the climate change crisis and face its severe repercussions, which is mainly caused by developed countries.