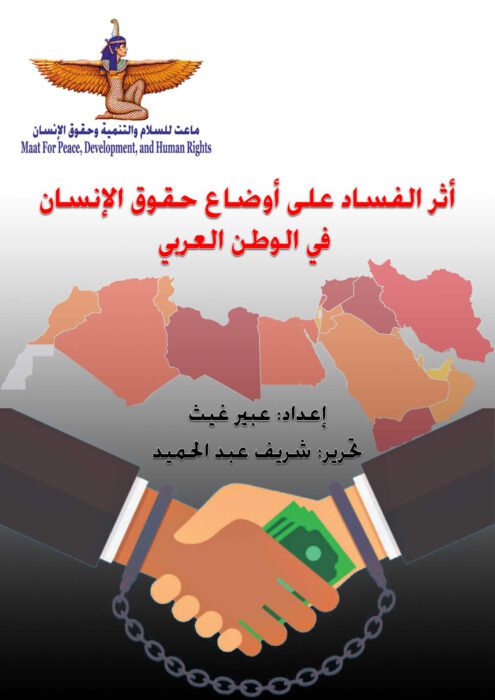 Aqeel: The Arab countries have not taken serious steps to combat corruption on the ground

Abeer Ghaith: The phenomenon of corruption has a great impact on the enjoyment of human rights and sustainable development in the Arab world

Maat Foundation for Peace, Development and Human Rights issued a report entitled “The Impact of Corruption on Human Rights in the Arab World,” which explained that corruption in its broad sense has a great impact on human rights, as it undermines and violates them because it constitutes a consequence that prevents their enjoyment. Human Rights sought to study the interrelationship between anti-corruption and human rights. The Sub-Committee for the Promotion and Protection of Human Rights of the Economic and Social Council adopted several decisions in this field.

The report emphasized that corruption is a multi-form criminal phenomenon with negative effects on moral values, political life, economic and social aspects, bearing in mind that tackling corruption is not limited to the official authorities of the state, but also includes individuals and civil society institutions that should play an effective role in this the field. The report added that Arab countries were not in isolation from confronting this phenomenon, and emphasizing the need for Arab cooperation to prevent and combat corruption as a phenomenon that transcends national borders. The Arab countries agreed on December 21, 2010 through the League of Arab States to establish a cooperative framework to combat corruption, which is the Arab Agreement To combat corruption, which represents the Arab addition to the group of international and regional anti-corruption instruments.

Ayman Aqil, head of the Maat Foundation, said that despite the approval of anti-corruption in Arab constitutions, laws and legislations, as well as the establishment of monitoring bodies to combat corruption in them, in most cases these rules have not been applied on the ground, especially since the supervisory bodies that were established to monitor and combat Most of the corruption follows the top of the political authority, and the best proof of this is the solutions of most Arab countries in late positions according to the Corruption Index for 2019, which indicates that these rules are not being implemented optimally.

For her part, Abeer Ghaith, a researcher at the Maat Foundation, said that the phenomenon of corruption in Arab countries has a great impact on the protection of human rights and on sustainable development, as the corrupt management of public resources harms the government's ability to provide a range of services, including health, education and care services necessary for the realization of rights. Economic, social and cultural. Corruption may also affect the enjoyment of civil and political rights. It may weaken democratic institutions in both new and long-established democracies.