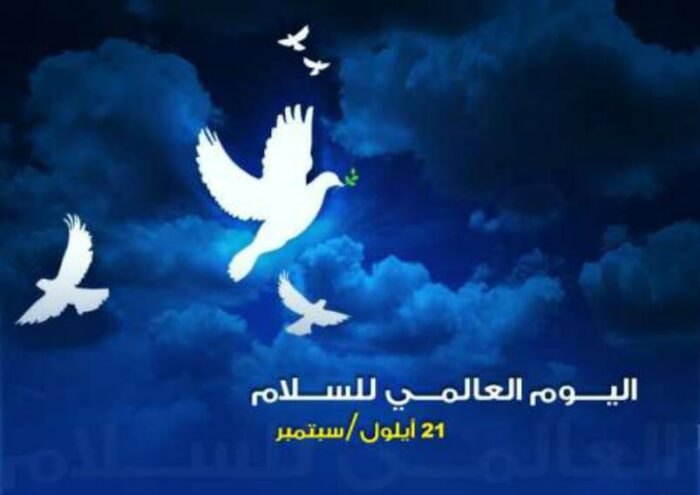 Maat: It calls on the international system to reconsider the mechanisms that protect world peace

In memory of the International Day of Peace

Maat: The coalition will include about 50 organizations from different continents of the world with the aim of restoring peace and human rights values

Maat: It calls on the international system to reconsider the mechanisms that protect world peace

On September 21, 2017, the world celebrates the 35th Day of World Peace, which was adopted byPursuant to United Nations General Assembly Resolution 67/36, then Resolution 55/8282 in 2001, which made September 21 a day for abstaining from Violence And cease fire.

And in line with the United Nations call for all nations and peoples to commit themselves to the cessation of hostilities during this day, and to revive it with education and awareness-raising among the public of issues related to peace  And coinciding with the convening of the work of the United Nations General Assembly at its seventy-second session, the Maat Foundation calls on the international system in all its pillars to radically reconsider the foundations and mechanisms for supporting and protecting world peace, especially in light of what the world is witnessing of the threat to peace and human rights values, perhaps in a way It is the most severe since World War II.

Where ethnic and sectarian conflicts expand, extremism is growing, terrorism, organized crime and violence are expanding, the foundations of the peaceful and democratic transfer of power are disrupted in different regions of the world, and standards of justice and redress are absent, and despite the attempts of the international system to adopt strategies and plans aimed at promoting peace and achieving sustainable development in all its dimensions, but Most of these attempts do not reach their goal for various political, human rights, social and cultural reasons.

In this context, Maat Foundation for Peace, Development and Human Rights announces that it and a number of non-governmental organizations active in the Arab, African, European and American surroundings are currently discussing an ambitious vision for establishing a “global coalition of civil society organizations for peace, to serve as a coalition of effective and influential non-governmental organizations.” They can work together to monitor human rights violations and attempts to hinder peace, violence, terror and intimidation, and work effectively through UN, regional and national mechanisms to stop the spread of those practices that threaten world peace.

The "Coalition of Civil Society Organizations for Peace", to be established, stems from the ground of the moral responsibility of civil society organizations in making peace, and restoring respect for the human rights values agreed upon by the world since 1948 and included in the Universal Declaration of Human Rights, and then expressed in detail a set of human rights conventions and covenants. Adopted by the United Nations General Assembly.

The coalition will include organizations interested in issues of peace, democracy, human rights, and countering extremism and terrorism across the world and will work on advocating against human rights violations and reforming policies related to promoting peace and working closely with the UN system, regional bodies and national parties within the framework of a true partnership for peace.