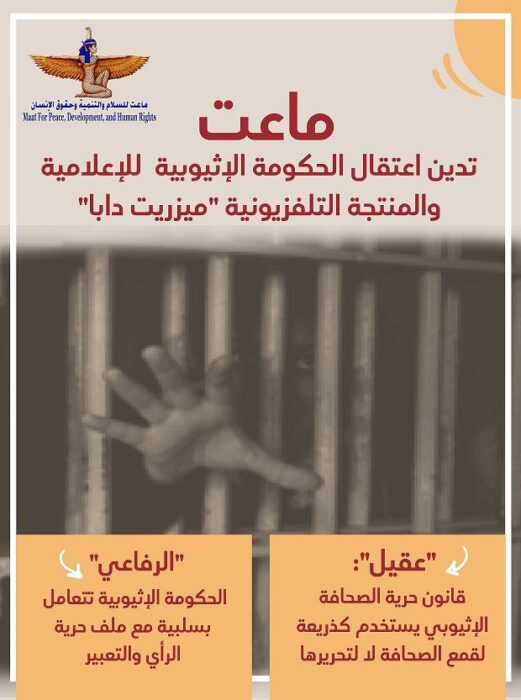 Okeil: Ethiopia's Press Freedom Act is used as a pretext to suppress rather than liberate media

Al-Rifai: Ethiopia misuses the file of freedom of opinion and expression

Maat for Peace, Development, and Human Rights bitterly condemns the arbitrary detention of many media professionals and journalists in Ethiopia, the most recent of which is the Tv Producer & Oromo ActivistMeseret Daba,who was arrested from her home by the Ethiopian security forces without an official arrest warrant.

This was not the first time that "Daba", a former TV presenter at the opposition-run OMN channel, founded by the Ethiopian dissident Jawar Mohammed, was arrested. She was among dozens of other individuals who were arrested under a decision made by the Federal High Court, Lideta Branch, for wearing yellow clothes during a main hearing in the case of Jawhar Mohammed and others, in solidarity with the defendants.

In this regard, Ayman Okeil, president of Maat, said that media and press freedom, as well as the rights of media workers in Ethiopia, remain in constant danger, especially in light of the ongoing arrests of journalists and the incessant closure of newspapers and television stations. Okeil added that the loose, vaguely worded terms of Ethiopia's Press Freedom Act, issued in 1992, limit the ability of journalists and media professionals to exercise their roles. Moreover, OKeil, who is also a human rights expert, called on the Ethiopian government to immediately and unconditionally release prisoners of conscience.

Sherif Al-Rifai, a researcher at the African Affairs and Sustainable Development Unit, stated that before arresting Daba, the government has withdrawn the license of the Tv media channel in which she was working. The arrest was also part of an extensive campaign launched by the government to muzzle the advocates of the Ethiopian opposition figure, Jawhar Mohammed. Al-Rifai added that the hunger strike campaign of detainees in Ethiopia strikingly indicates Ethiopia's misuse of the file of freedom of opinion and expression.

Maat is deeply interested in the African continent affairs given the fact that it serves as a member organization of the Economic, Social, and Cultural Council of the African Union (ECOSOCC) and as a monitor in the African Commission on Human and Peoples' Rights. Besides, Maat is the North Africa Coordinator for the NGO Major Group for Africa affiliated to the UN high-level political forum.