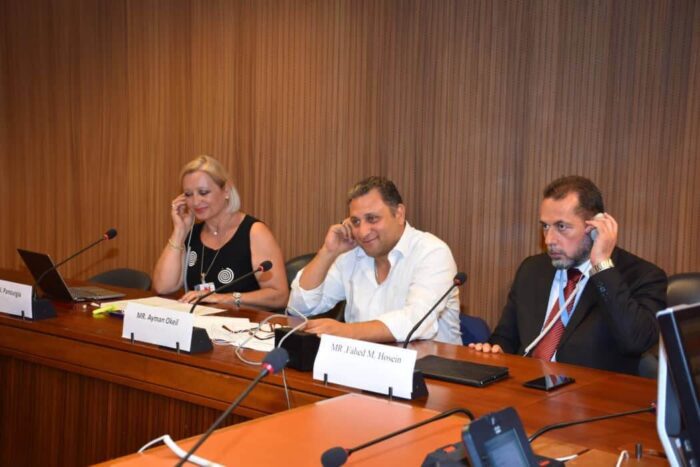 On the sidelines of its participation in the work of the 38th session of the Human Rights Council in Geneva, the Maat Foundation for Peace, Development and Human Rights, in cooperation with the International Alliance for Peace and Development, organized a symposium entitled “Human Rights Violations in the Occupied Palestinian Arab Territories”, on Monday, July 2, 2018 at the European headquarters of the United Nations in the presence of my representatives A large number of Arab and European human rights organizations, representatives of official missions and High Commission officials.
The meeting was moderated by Ayman Aqil, President of the Maat Foundation for Peace, Development and Human Rights, and Fahd Muhammad Hussein, General Coordinator of the International Campaign for Solidarity with Prisoners in the Prisons of the Israeli Occupation "Solidarity" and an expert on Palestinian affairs, and Ms. Kitty Panja, member of the International Alliance for Peace and Development and European Ambassador for Entrepreneurship of Women
In his speech, Aqil emphasized that the Palestinian issue is a central issue and one of the issues that express the absence of justice, undermining the foundations of peace and the continuous violation of human rights, indicating that last May, a full 70 years have passed since the tragedy of the defenseless Palestinian people, who have been displaced by several million Of his sons, Aqeel added that the oppressive practices of the Israeli occupation forces against the Palestinian people, which are flagrantly inconsistent with international conventions and laws, express Israel's indifference to its status as the occupying power and it has obligations to provide all the needs of the protected population in accordance with the Geneva Conventions, especially the Fourth Convention on the Protection of Civilian rights, Aqeel asked a question: Are conventions and instruments of international humanitarian law and instruments of the international bill of human rights still applicable? And able to defend itself against those who beat her daily? .
Mr. Fahd Muhammad Hussein presented shocking statistics about Palestinian prisoners in the occupation prisons, and the hideous violations committed by the occupation authority against all groups of the Palestinian people, including children. He said that the violations suffered by Palestinian prisoners of children in Israeli occupation prisons are considered crimes of many shapes and colors. Her brow of humanity.
The Palestinian expert stated that more than 8,500 children were arrested during the past years, among them more than  700 They were tried before military courts that violate the rights of the child, as well as dozens of children who are still under administrative detention. Fahd Hussein revealed that recent months have witnessed an increase in the occupation crimes against Palestinian children, and he called on the international community and the Human Rights Council to take immediate action to save Palestinian prisoners and children from among Fangs of brutal occupation.
In her speech, Mrs. Kitty Jigsaw expressed the view of the International Alliance for Peace and Development, which calls on the partisan, civil, media and popular organizations in all countries of the world to mobilize their efforts and mobilize their tools to communicate with policy makers and decision-making circles in their countries to push them to take measures that will stop the Israeli crimes against the people. The Palestinian Authority, and revealing the immoral justifications that make some governments take diplomatic and political positions in favor of a country that violates human rights on a daily basis, refuses to comply with Security Council resolutions and underestimates international law.
Speakers also stressed the need for an international investigation, the formation of an international committee on the massacres and war crimes committed by the occupation authority in the Gaza Strip since the start of the Great Return Marches last March 2018, and international action against the American decision to transfer the US embassy to Jerusalem, which is in violation of all charters. And international agreements, and they demanded a halt to settlement building, settlement expansion and activities to build the separation wall, and an end to the forced eviction of Palestinian residents and the demolition of their homes.