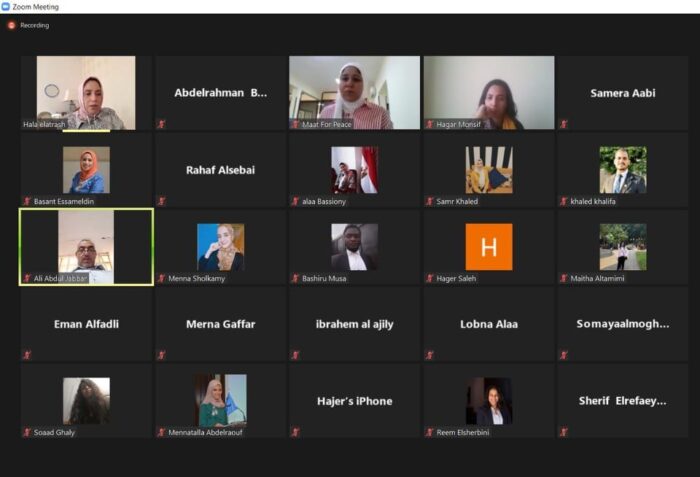 The # International Humanitarian Law Unit in cooperation with the African Affairs Unit and the # Sustainable Development at Maat Foundation for Peace, Development and Human Rights organized a workshop on the electronic platform “Zoom” under the title “Protection of girls and women among vulnerable groups in the Middle East and Africa” on the 11th and 12th of October on the occasion of the International Day of the Girl. It was joined by a large number of participants from different countries such as # Libya, # Somalia, Egypt, Kuwait, # Lebanon and # Syria.

The workshop was led by a number of international experts. On the first day, Ambassador Mushira Khattab, former Minister of State for Family and Population and a member of the African Committee for the Rights and Welfare of the Child, spoke about the situation of girls in Egypt and the achievements and challenges aimed at protecting the Egyptian girl. Chancellor Monia Ammar spoke at the Court of Commentary in Tunis and the President of the Arab Center For international law, which emphasized the importance of focusing on community awareness in protecting the child, she shared her vast experiences in the field of Tunisian law protection for the girl. The first day ended with the speech of His Excellency Mona Abu Sneineh, Chairman of the Board of Directors of the International Child Defense Movement in Palestine, which referred to the various problems facing the State of Palestine In implementing the International Convention on the Rights of the Child on the ground.

As for the second day, he began by presenting the Somali human rights activist and project manager at the International Alliance for Peace and Development in Geneva, “Samira Abe,” who referred in her speech to the situation of girls in Somalia and the issue of early marriage currently burning in Somalia.

Then Dr. Hala Al-Atrash, Professor of International Law at the University of Benghazi and a founding member of the Libyan Organization for the Promotion of International Humanitarian Law, spoke about the mechanisms for protecting women in # Libya at the time of armed conflict.

After completing the case study sessions, Professor “Reem El-Sherbiny,” in charge of Child Protection - Elimination of Child Marriage at UNICEF (Egypt), shed light on the efforts made by international organizations to protect children with a focus on child protection projects in Egypt. The workshop concluded with the speech of Professor “Rahaf” Al-Sebaei “Coordinator of the Community Center in the Syrian Red Crescent, which referred to the situation of the girl in Syria and the daily challenges that she faces. She also made a number of recommendations about supporting the Syrian girl.

Parallel to the workshop sessions, an interactive dialogue was organized with the participating youth, which resulted in the presentation of a package of recommendations to the countries that were addressed in the workshop within two days (Egypt, Tunisia, Palestine, Somalia, Libya and Syria) on strengthening the protection of girls and women.

On the sidelines of this, the head of Maat Foundation, “Ayman Aqil,” stressed that it is imperative to increase community awareness and spread the culture of protecting girls who face discrimination and violence, as all human rights instruments and other instruments related to children's rights, including the Convention on the Rights of the Child and the Convention on the Elimination of All Forms of Discrimination against Women The CRPD and Optional Protocols to those conventions recognize that empowering and investing in girls is indispensable for economic growth.

On the other hand, Nourhan Mustafa, director of the International Humanitarian Law Unit at the Maat Foundation in Light of Conflict, affirmed that adolescent girls suffer greatly, even though international humanitarian law provides for the threat of women with sexual violence. Women prisoners should be held separately from men to avoid sexual assault. 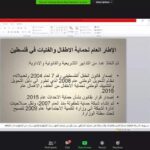 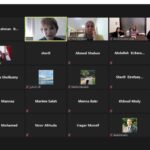 International humanitarian law also requires that pregnant women and mothers of young children, especially nursing mothers, be treated with special care. This applies, for example, to the provision of food, clothing, medical care, evacuation and transportation.

For her part, Hajer Moncef, Director of the African Affairs and Sustainable Development Unit, stated that the African girl has a special status due to the complex conditions surrounding some African countries from armed conflict and the spread of terrorist groups in addition to the spread of customs and traditions harmful to children in general and girls in particular.

For example, more than half of the girls in Somalia are subjected to female genital mutilation. In Nigeria, the percentage of girls who were married before reaching the age of eighteen reached 44% of girls at this age. Therefore, special attention must be paid to girls in Africa and work to protect them urgently.